Authority, class and race in schools

Teachers are not infallible, assuming they are puts vulnerable children at risk.

Recently I saw the above statement online via a tweet from a Headteacher of a secondary school in London. The school is successful by external measures and has been rated outstanding by Ofsted. The headteacher is clear on her “no excuses” behavioural approach.  The school is in an economically deprived area and in an area with a high proportion of children from ethnic minority backgrounds. 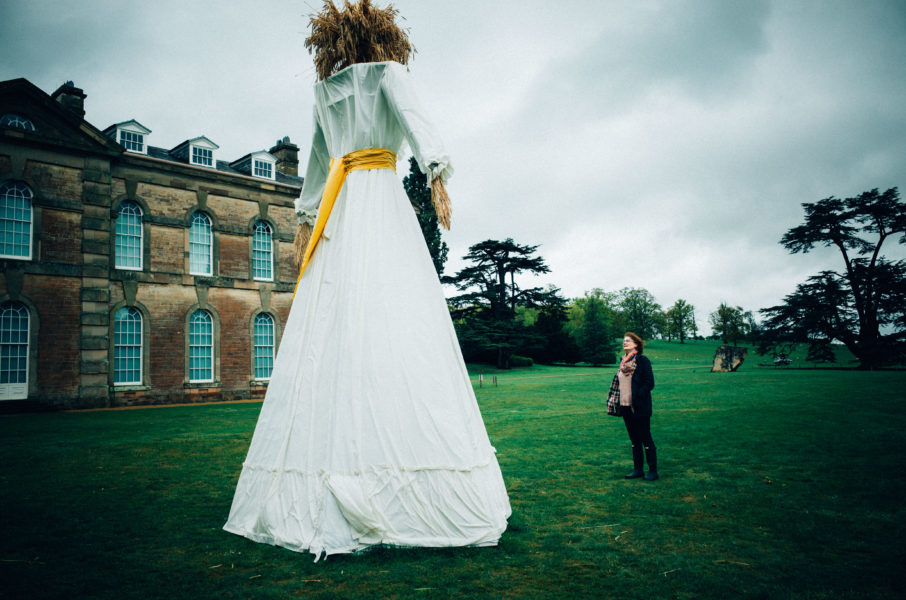 I respect the school’s commitment to excellence but find the Head’s public contrarian persona not to my taste. Anybody praised by Toby Young (who has questionable views on eugenics) generally isn’t my cup of tea. However my general approach has been, “my children don’t go to her school so it’s none of my business.” I don’t follow her account.

However, her views about backing teachers no matter what were quoted (in disbelief) by several people I follow outside of education and it got me thinking about a wider approach and attitude that I’ve seen from some educators in my 14 years in schools and 3 years at an educational think tank.

The Headteacher quoted may be alone in being brazen enough to publicly say what she said without regret but she’s definitely not the only person in schools to think it or even say it behind closed doors.

Interesting plot twist is that the Headteacher is of Caribbean heritage, which allows her to dismiss issues around race when it suits, whilst simultaneously saying and writing statements that a large proportion of every day racist people would baulk at having publicly attached to their names.

Below are the tweets that I wrote to address my thoughts about educationalists who advocate what I consider an overly authoritarian and almost military approach to discipline in schools and unquestioning adherence to authority figures. Especially schools in disadvantaged areas with high proportions of children from poor backgrounds and ethnic minority backgrounds. I’ve used a specific event to talk about what I consider a wider issue in the state education sector in England.

I’ve changed the order of some of the tweets and written full words instead of the abbreviations I’d normally use on Twitter to save space but otherwise they are unchanged. The headings here replace the GIFs I had in my original tweets. New paragraph generally signifies a new tweet.

Whenever people I follow who aren’t in education mention specific people on Edu Twitter I know that two clicks will reveal madness. Today I clicked and thought… Publicly support teachers who have been racist? Nope. I don’t care how good a school’s results are. Nope. 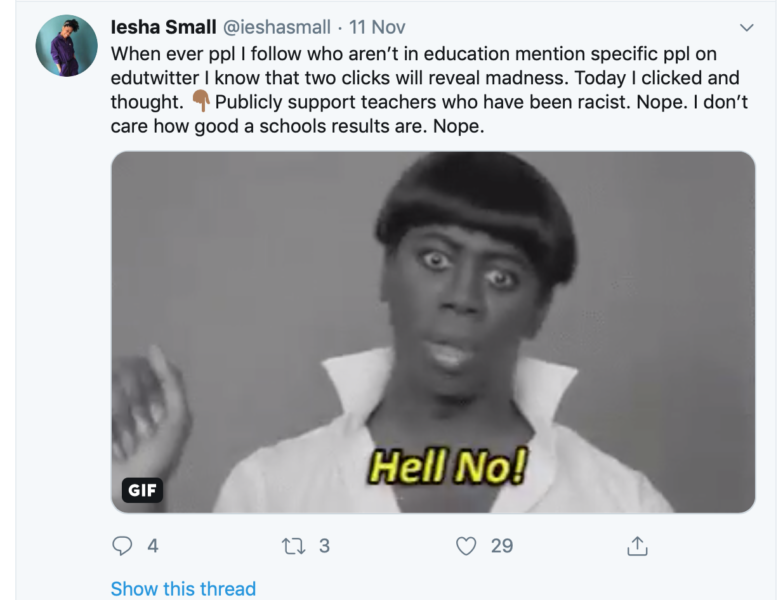 Character education – only for children?

Some people in education seem to think that “good character” only applies to children and young people and it really shows. Quick to ensure + expect perfect behaviour + punish if they fall short but expect much lower bar from adults.

Some people think that education is all about results and it shows. Good external exam results do not override everything else.

Too many people think some teachers’ own bigotry will not affect how they interact with children they teach or staff they work with or communities they serve.

Too many people treat bigotry as a slight character quirk or flaw that can be overlooked because everything else is great. It. Will. Enthuse. Everything. The. Person. Does. And. How. They. Think.

Some people think education is about command and control and it shows. How about acting in a long term way that makes young people want to do the right thing when you aren’t around and when they won’t get caught.

So are we gonna talk about the fact that too many people in education fundamentally believe that kids from disadvantaged backgrounds need stricter behavioural rules than other kids?

Let’s not pretend that kids from wealthier backgrounds don’t challenge teachers or authority.

I see a few state schools trumpeting that they give a private school education to kids. Yeah. While treating kids in a way that parents in private schools would NEVER let them get away with. And they know that. Big chat re social capital while exploiting parents’ lack of it.

Too many people want to demand respect automatically but won’t put in the time to earn it. This applies to teachers + pupils. 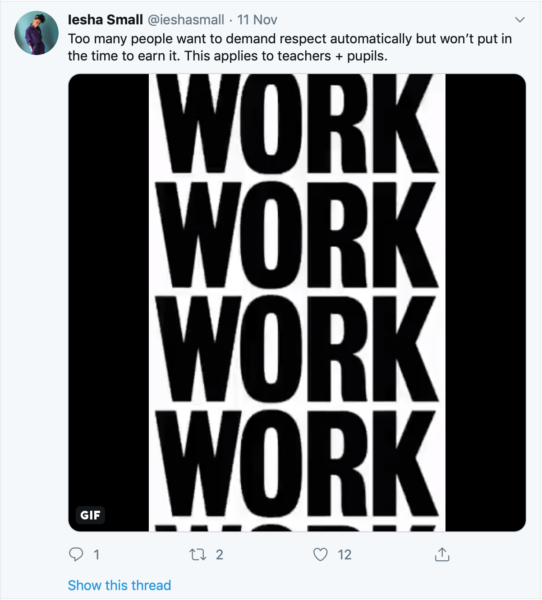 Also are people in education community gonna have a proper conversation about the fact that a sizable minority of people in schools have good reason to not trust adults or authority figures + not just the kids we label “difficult.” Have people never heard of abuse? Earn. Trust.

Retweeting previous because most safeguarding I’ve sat through has highlighted that marginalized groups more likely to be abused. Ethnic minorities. Kids with SEND etc, etc. Why? People don’t listen to them. So abusers + nefarious people know they can get away with it. Imagine giving them carte blanche.

A sizable minority of people in schools have good reason to not trust adults or authority figures. Have people never heard of abuse? Earn. Trust. Click To Tweet

What do I know?

And because this is Twitter + people love to talk about what they don’t know. I say all of the above having line managed + supported teachers re parents, pupils etc even when on reflection they could have made better/different choices. No one is infallible.

I say all the above as somebody who was considered a strict teacher when I taught + who taught in challenging schools + who consistently pushed kids to get results better than they + others thought they could.

I also say the above as a somebody who made mistakes as a teacher + leader in schools. Any person in authority who is unable to admit mistakes + learn from them + do better is not a person I want to have to interact with.

… There were times kids were wrong but they were also times when I needed to reflect on fact that I was the adult + professional  + needed to behave like it.

Why do I care?

…I care that [the headtacher’s] views enable a lot of people who don’t have best interests of the communities we are discussing at heart.

There is a point when people need to understand that hyperbole + bluster have gone too far and that words have power. Some statements enable nonsense and worse from people who do not have the best interests of disadvantaged communities at heart. Stop pandering to clowns. 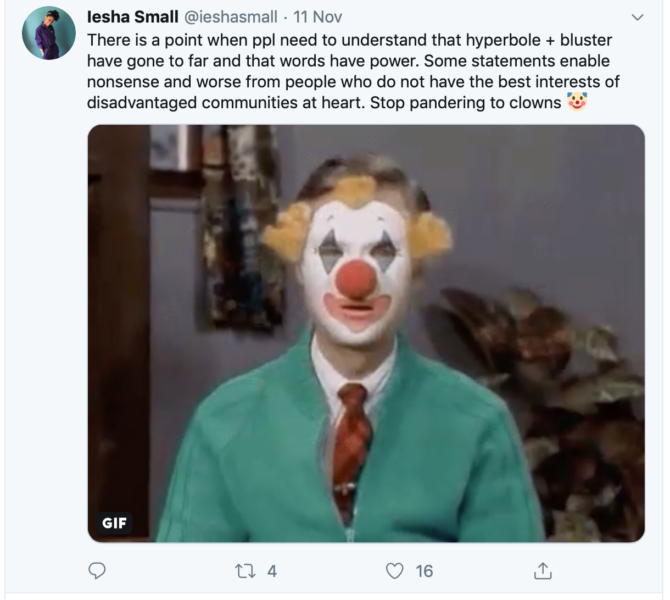