The Universal Panacea? The number one shift in UK education I wish to see in my lifetime

“Britain was a society run mostly by cliques and groups of friends who had first met at public schools and Oxbridge.  Public school education remained the key for anyone hoping to make a career in the City, the civil service or the higher echelons of the army. Schools such as Eaton, Harrow and Winchester might educate only some 5 per cent of the population but the still provided the majority of political leaders, including many of the cabinet” – A History of Modern Britan. A.Marr

The above describes a Britain of the past, 1945, to be exact.  Mired in tradition and social inequity and trying to create a new identity in the aftermath of two recent, devastating wars.  However, as I sit writing this post in a Britain 70+ years later, I wonder just how much has really changed?

This post is my response to the #blogsync initiative, with this month’s title considering a universal educational panacea.  Firstly, I must state that I do not believe in panaceas of any kind.  By eradicating some problems you may unwittingly create new ones and the cure for today’s diseases can have no knowledge of how to combat the diseases of tomorrow which have yet to mutate or be created.   However, upon pondering the wider title it, occurred to me that my career in education so far has been driven by my desire to help bring about one particular element of educational change that I wish to see in my lifetime.  I want to see the link between socio- economic background and educational outcomes destroyed and banished to history.

When I was at school Afro-Caribbean boys were the kings of underachievement, now White working class boys vie for their crowns (and in many areas have dethroned them).  It’s easy to become side tracked by issues of race and sex but the main unifier for these and other underperforming groups in nearly any school is poverty (and lack of opportunity, perceived or real).  In general , the English school system fails poor children and has done so for quite some time.  Schools in poorer areas tend to have worse educational outcomes than those in wealthier locales, and poor pupils in leafy, suburban high performing schools tend to do worse than their more affluent peers. I wish to see this change.  I want all students to have access to a high quality education, not just those whose parents can afford to give them one either by sending them to a private school or by hiring a tutor to supplement what happens at school or  by moving into  the expensive catchment areas of ‘better’ state schools.

In general , the English school system fails poor children and has done so for quite some time. Click To Tweet

I would like to live in an England where the terms Free School Meal (FSM) and Not in Education Employment or Training (NEET)  become meaningless as ways to categorise our children because our high aspirations for all result in every student being challenged, pushed and inspired to achieve and exceed during their 11 (possibly soon to be 13) years of compulsory state education.

“More generally, there was a belief that public schools had contributed to the failures of leadership in the thirties and right up to the early defeats of the war.  When the Tory Minister R.A. Butler took on the job of education during the war, he contemplated abolishing them and folding them into a single state school system”- A History of Modern Britain. A. Marr.

When I read the above I couldn’t quite believe what I had read.  It seems almost unthinkable now that public schools would ever be abolished, the best are seen as the gold standard for education and their old boys and (less commonly) old girls dominate the higher reaches of our political and judicial systems .  I don’t feel that private schools themselves are the problem but I do look forward to a world where everybody in our society has a vested and personal interest in ensuring that every single school delivers a high quality education to all children in it’s care.  Most people only tend to take notice of such things if there is a possibility that it might affect their families directly…

Here I would like to state that I have no opposition to public schools in principle, they provide a service that people are willing to pay for and often do it well.  My grandparents saved to send my youngest aunt to a good private school after they saw how the disaster that was 70s state education had failed their two other children. She did well and became the first in our family to attend university.  10 years later, I became the second but only after my parents had fought long and hard to get me into a state grammar school several miles from our home in another educational authority.  I have benefitted from the English state system but as I look around at family members and peers from a similar working class, background to mine, I realise that I was the exception and not the norm.  I feel that the link between socio-economic background and educational outcomes can only be broken when every single school in England becomes one where all teachers deliver a high quality education to all children.

The above deals hints at structural reform, which is the preserve of politicians.

Well since I entered teaching, I have chosen to work particular types of schools with pupils from particular types of backgrounds. Students in leafy suburbs don’t need me and people like me. Their parents get them tutors, irrespective of the quality of teaching they receive.  I want to deliver an outstanding education to and improve the life chances of students whose parents don’t have connections and who want the best for them but aren’t sure how to go about it. Children who could have been me,  my childhood friends or my family.

Although we don’t like to admit it, teachers are middle class professionals. With national pay scales meaning that many of us (yes even NQTs) who teach in various areas around the country earn more than many of the parents of the students that we teach. 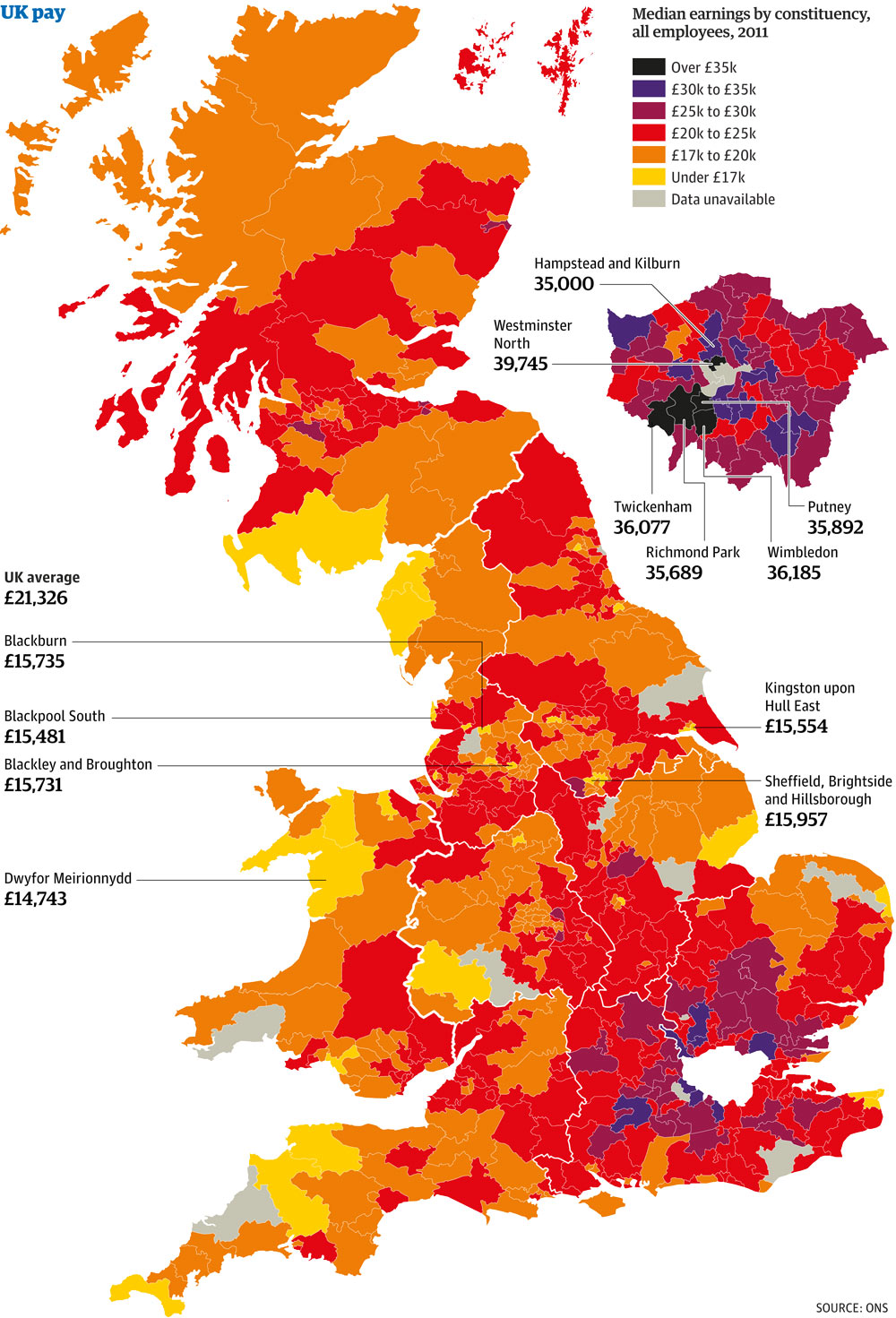 Median earnings in the UK by region

We can help our students by not making poverty an excuse.  So what if they are poor? We can still expect them to treat each other with respect? So what if their parents didn’t go to university? They can still aim for top grades and work hard in class? So what if they don’t have a desk at home? They can revise in the library after school.  Mollycoddling our less affluent students may make things easy in the short run but they won’t thank us in in the future when they have rubbish qualifications and can’t get into college or find a job. We can help then to smash through the wall, or climb over it rather than continually banging their head on it or seeing it as an insurmountable object.

In our daily interactions, we can provide them with the social capital that their more affluent peers absorb from their surrounds by osmosis.  Yes I know there is a syllabus to get through, but 10 minutes discussing the myth of Narcissus and exploring the origins of the word narcissist with the young girl who keeps checking her foundation in her make up mirror is 10 mins which adds to levelling the playing field between students from different cultural backgrounds.  Social capital is dismissed by elitist and irrelevant by some, usually those who have quite a bit of it themselves. It is elitist and for that reason shouldn’t be dismissed, we need to help our students to become fluent in the language of the elite so that they can move in and out of their worlds with confidence. That is the type of thing that will make working class children feel good about themselves and more comfortable applying for elite universities and will mean that the gate keepers to these institutions see them as equals and allow them in.

For those of us with responsibilities over other educational professionals we can keep be aware of good practice that helps all of our children to achieve and make sure that we don’t implement policies things that put poorer children at disadvantage on a departmental or school level. The Sutton Trust and Education Endowment Fund are excellent sources of information for research and good practice in this area.

So what educational change do I wish to see? I want hard work and effort to be the thing that determines pupils educational outcomes not where they live or how wealthy their parents are. I want all of our children to compete on a level educational playing field.

If you are interested in the human side of leadership then my book The Unexpected Leader is for you. Read a sample and if you like it then order on Amazon.