As promised, here is the story of how I climbed, Ben Macdui, the 2nd highest mountain in the UK by mistake- my first proper adventure in the Cairngorms so far. I started working on an email to you yesterday and continued this morning for an hour in writers’ group but didn’t finish. In between I fired off a quickish one to Ted which I’ve already sent so I thought I’d amend that one with some Babe- specific extras so you’d get it before I actually come home (!) Sometimes done is better than perfect.

So as you know, Saturday I planned to go up Cairn Gorm -it’s a singular mountain but the entire range is also named after it- the mountain weather forecast on mwis.org was good and I thought, “Might as well.” It’s the 6th Highest peak in UK at 1245m but also pretty achievable for somebody in fairly good health and who can walk a few hours uphill without difficulty and climb fairly steep steps. My previous mountain experience so far has been Snowdon (1085m), with Claire a few years ago. It was which was great fun but I’m definitely not an expert. Ted recommended Cairn Gorm as a good starter Munro for somebody travelling alone in the Cairngorms.

Accidentally had a false start at the lower car park (due to a reliance on Google maps and typing in a generic ‘Cairn Gorm car park’ instead of the more precise ‘Coire Cas car park’ ). I was in the car park lower down the mountain where the caravans and motor homes stayed but OS Maps app set me right and I jumped back in the car (after enjoying the view) to go to the one higher up and nearer the visitor centre.

Had a quick wee and a lady in the visitor centre directed me to the start of the Windy Ridge Path, there was another more gentle route but I wanted a bit of a challenge. Is in windy as in meandering or windy as in blow? Who knows? Either would work but to be honest I was lucky with the wind.

It’s a well labeled path but- whew- the start of the ascent is STEEP, I stopped a few times to eat my porridge (I left my flat at about 8.30 and you know that’s too early for me to have breakfast) and to give my thighs a rest. I did notice my ears popping a little, like they do as a plane ascends, once I got past the ski lodge which was an unexpected experience. 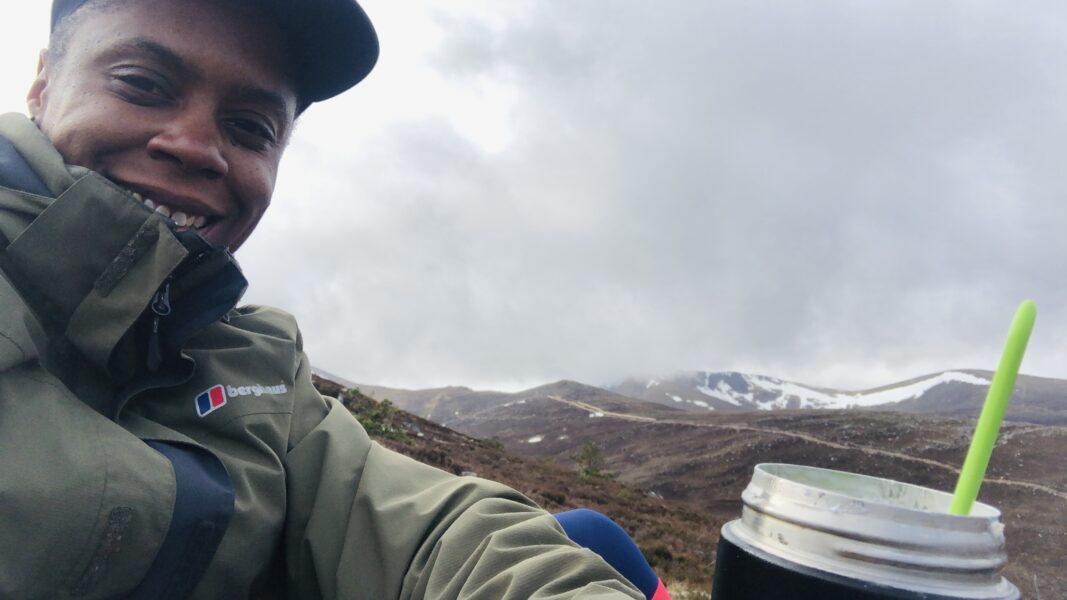 I’d decided not to listen to my music or any podcasts so I could pay attention to my surroundings and got talking to a woman about 3/4 of the way up called Helen. She was interesting and so we kept talking. She said she was carrying on to Ben Macdui (2nd Highest peak in UK,  1309 m) after we climbed Cairn Gorm so she could run down and train for an ultra marathon she was doing later in the year up Ben Nevis(!) and I was welcome to carry on with her if I wanted.

Now listen, I’d read about the Cairn Gorm to Ben Macdui route as part of my original planning earlier this week and quite a few accounts (including Walk Highlands) mentionned the plateau could be tricky for newbies to the area if their navigation skills weren’t up to scratch- especially if there was still snow. “The plateau itself is extremely exposed and tricky to navigate except in perfect conditions – particularly serious when under snow.” For that reason, I had decided against it when planning for a hike on my own but…

Helen a) lived in the region b) was a qualified mountain leader and I could tell she knew her stuff from our conversation so far and the way she moved about on the mountain. So…of course I said “YES!” I warned her I probably wouldn’t run down. However, I could walk quickly or return to my route once we’d done the loop if she felt I was slowing her down too much for her ultra training. She said not to worry because she was enjoying the chat.

While walking and talking we got to the top of Cairn Gorm and I was pleased. 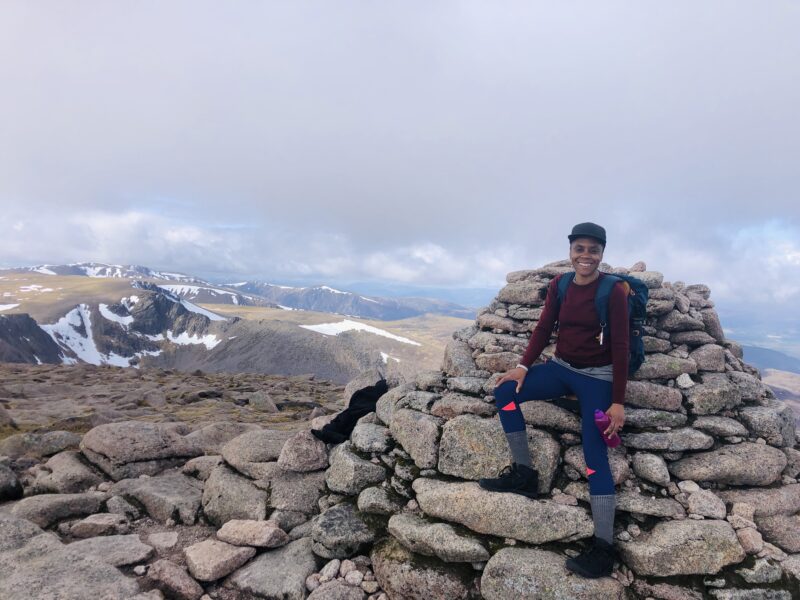 After the obligatory summit photo of my first ever Munro  (Scottish mountain over 914m/ 3000 ft) we walked along the Cairngorms plateau. I immediately saw why the route explanations had warned against it for newbies. There were still fairly large patches of snow and I definitely would have lost some of the route if I’d tried it alone. There were other people there but you can’t always follow them because you don’t know the route they have planned or their experience level. The cairngorms plateau leads onto number of interconnected summits. However, Helen knew her stuff and helped guide me and pointed out how she was using the OS maps app along side my paper map. She also had a handy hint about using the cairns to help guide the way. Not a fail safe but useful.

On reflection, hiking poles would probably have been helpful in on the snowy bits as some parts had turned to ice and were slippery but you live and learn, maybe I’ll buy some budget ones from Decathlon for future trips and see what I think.

Part way, we met some guys who were on the way back from Ben Macdui’s summit who took a photo for us. 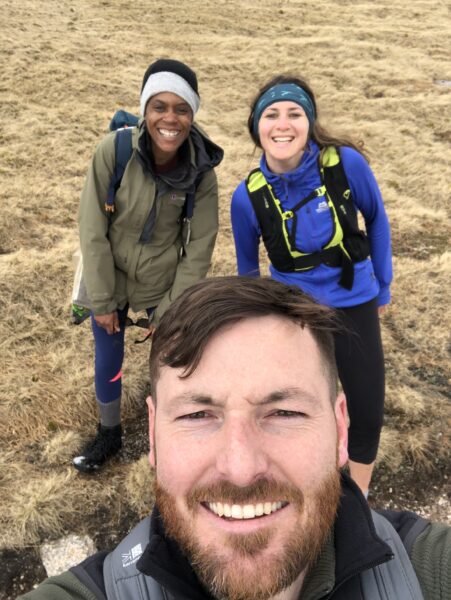 Then we made it to the top Ben Macdui, A first for both me and Helen! 1039m, the 2nd highest peak in the UK (after Ben Nevis) had passed by quickly due to interesting chat covering career decisions, adventure, friendships, photography and love. 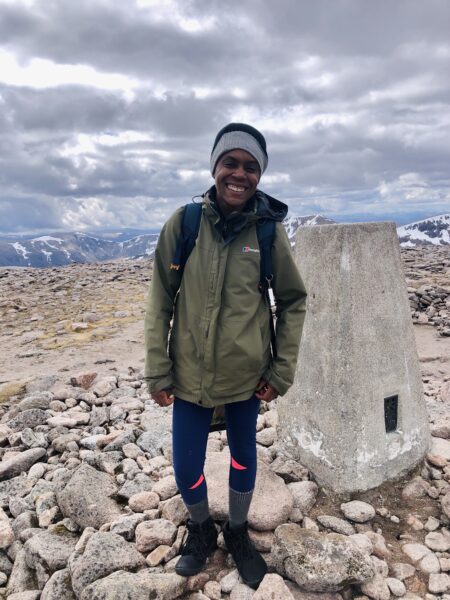 Two munros in one day, about 11 miles walked in about 4 and a half hours (outside of food stops) and back in time for a long bath. Not too shabby for my first proper walk in the Cairngorms. It was a good day’s walk!

Here ends Cairngorms adventure part 1. More to come. My snacks and packed lunch were just right and dates Sami sent me were excellent for packing an extra energy punch once the proper food ran out. Good thing I packed extra dates and dark chocolate as I was able to share them with Helen. Having a  proper rest day today. My thighs are thankful- might get my massage gun out again!

Enjoyed reading this blog post or found it useful or interesting? Share it with somebody else who you think will too.

For the next few months I’ll be writing about a wider ranger topics than usual because I’m taking some extended leave and expanding my horizons in a variety of ways. I hope you’ll come on this journey with me.