Walking to Aviemore (via gin)

The Cairngorms area has at least 6 working whisky distilleries and people come from around the world to visit them on whisky tours but there are also number of gin distilleries (because gin is quicker to produce). One distillery, Kinrara, is located a few miles miles away and is walkable. I like gin, so it seemed like the stars had aligned to make me combine two things that I enjoy- walking and gin. On a whim, I booked on a tasting experience tasting before I went to bed, ready to go the next day.

I’d checked out the route to the distillery and it seemed simple enough, pretty much following the one of the local paths until a point where I needed to cross over and get to the A9, surely I could work that out. A quick morning chat with Andy, one of the host couple, before I left armed me with some good local knowledge of exactly where to cross “look out for some white gates across a railway bridge. You cannae miss it”

The plan was to get to the distillery, do the tasting (Kinrara is too small to offer actual distillery tours) and then rejoin the path and finish the route to Aviemore which would be easily signposted about another 2 or 3 miles away.

Good plan right? Well, yes, but I’d forgotten to add in some variables.

I usually walk at a pace of about 3 miles an hour. I consistently walk 1 mile in about 17 mins when I’m walking the dog and can go faster. However that’s generally at home which is pretty flat. I hadn’t taken into account:

I actually planned to leave 1.5 hrs to walk to Kinrara distillery which would have been fine but on the day I took a little longer to get out than I’d planned (no idea since all I did was shower and write in my journal!) I’m here on my own, maybe I need to face up to the cold reality that sometimes it’s not only the kids who faff and take ages to get out.

I eventually had 1hr to walk there, which was a little tight, given points 1-3 above. At about 1045 I realised I wasn’t going to be there for the 1100 start time, despite picking up my pace. I crossed my fingers, hoped I had mobile signal and rang ahead to the distillery.  Luckily I had reception at that point and told them I was on my way but the walk was taking a little longer than expected, I estimated I’d be 10-15 mins later than planned. The lady on the phone was lovely and said there were two other people booked on the experience and they were happy to wait for me.

With that sorted, I walked along looking out for the gate Andy had alerted me to and was relieved to see the white gate on my left as he’d said. 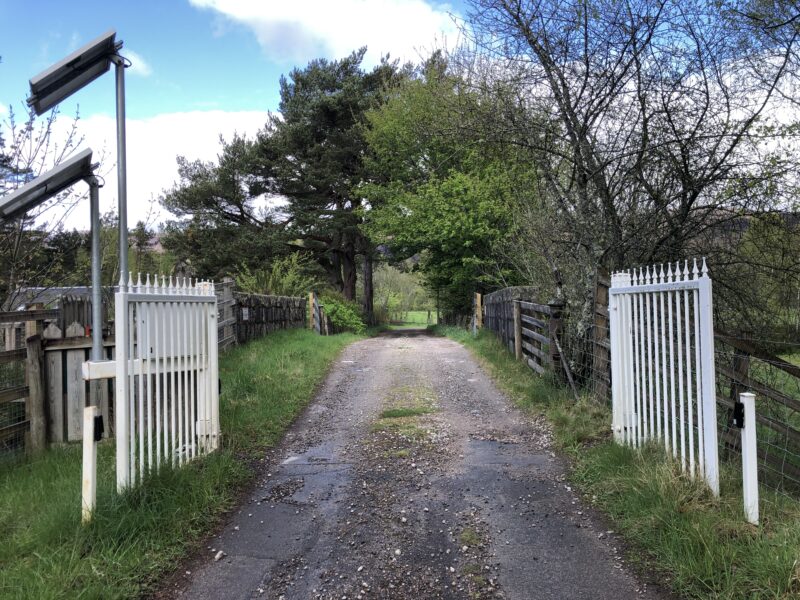 I ran over a road and a few fields and managed to arrive at Kinrara distillery at 1110 (as predicted!) 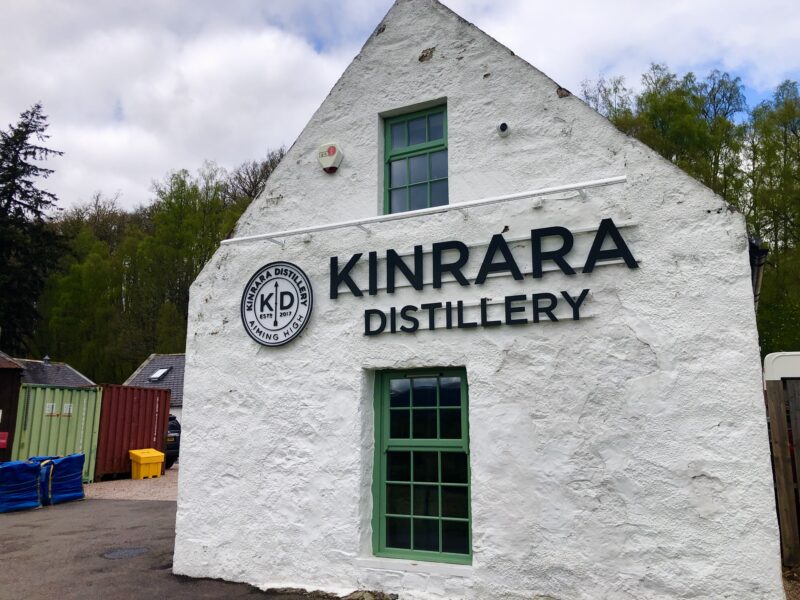 Kinrara is a new craft gin distillery (established in 2017). So new, that when I first mentioned I was going to it, Andy looked a bit blank for a while then exclaimed “Oh, aye, it’s only been there a few years!” when he realised where I was talking about.

I like gin but I don’t know much about it’s production so this tasting was a fabulous and fun introduction. There was a French couple there- I didn’t get their names as my late arrival meant the usual introductory chit chat convos were skipped to get the tasting in. I did know about juniper being the thing that gives gin it’s distinctive flavour because of a gin cocktail experience I’d been on for a work outing a few years ago in Bath. That was a good trip. I remember having to call a client with our CEO part way through the session outside on the pavement. We each had to dial in separately and tried to sound sober but I was definitely a bit merry.

I’m gonna be geeky and put in some things I learnt because I was genuinely fascinated. I love learning about how items that I take for granted are made.

The main shocker for me is that gin doesn’t have to white! While writing this, I realised that I actually did know that because of stuff like Bombay Sapphire which is blue, but I’d never seen a brown gin before. They had a gorgeous gin that looked like a dark rum or a whisky. It was aged in red wine casks and hence took on a brown aspect. I might add that it was absolutely delicious. Kind of christmassy a bit like mulled wine is to red wine. Think it was called Kinrara Oak Spiced  gin and I definitely felt flavours of cinnamon as I drank it. I also felt warm and cosy but it could be because I’d already asked three or four other gins prior to it (!)

During the tasting we chatted and the guide gave us lots of fun info. She also gave great serving suggestions such as popping frozen summer fruits in a gin if you fancied, or blueberries. My fave suggestion was hot orange peel (heat in microwave a bit first till it blisters a bit) because one of  the tasting gins had hints of orange in it. 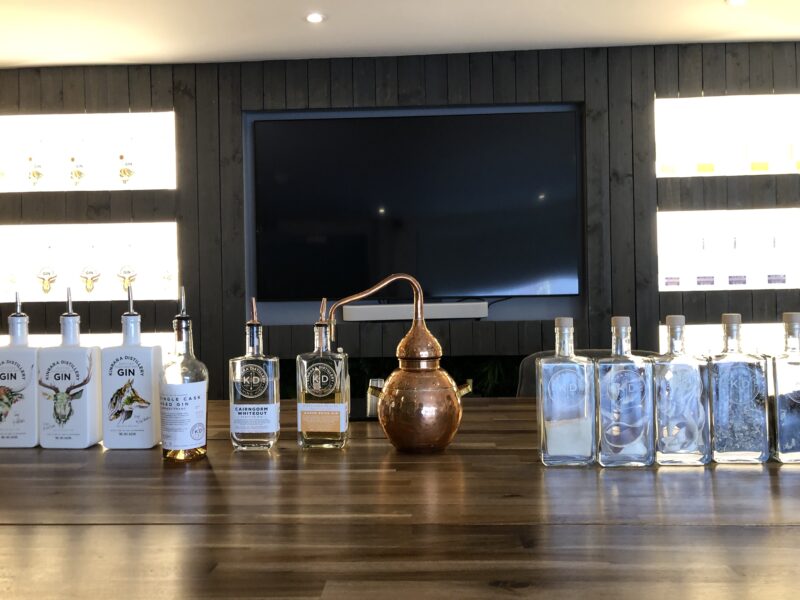 We had four or five gins in total and myself and the French wife were happily merry (the husband was driving and got his pick of mini bottles to take home). We both agreed the Christmassy Oak Spiced gin was our favourite followed closely by the citrusy Kinrara Highland Dry, their original blend.

The other thing to note was the artwork on the bottles, some of the gins had cute names like “Ginny” and “Struarn”  had beautiful artwork by an artist called Kat Baxter. She based her drawings on animals but also added the fruits that had infused the particular gin and elements of the family tweed of the distillery owners. They were beautiful.

The tasting was over in about an hour, then we were invited to the shop I really wanted the oak spiced gin but it was £60 a bottle and they didn’t have any mini bottles 🙁 so I brought my second fave, the Kinrara Highland Dry

Then it was time to go. The French couple went to their camper van and I wound my way to the road. Straight lines appeared to be more of a challenge for me than they had been an hour ago.  Remember my plan to walk the remaining 2-3 miles to Aviemore? I hadn’t factored in being mildly drunk (esp as I’d not yet had my breakfast porridge pot because I’d left later than expected). At least it was a sunny day!

As I was about to meander towards the A9, a camper van pulled up next to me and who was it? The French couple!

“Are you going to the city? Do you want a ride?”

Was this technically my first time hitch hiking? Who knows, but I eagerly climbed in. 10 min drive vs a tipsy 1hr walk -no contest especially as I’d probably be walking back from Aviemore later. I’d definitely get my 10,000 steps in that day.

The couple were going back to their home in Belgium (they’d re located from France) later that day but had visited a different part of Scotland every day of their week long holiday. The camper van/motor home they’d rented was very nice. Apparently it was originally for 4 they said they’d found it good for the two of them but it probably would be too cramped if their (two) teenage children had joined too. It was cosy with some cute dual design features, a bit like a barge I’d recently stayed in, and of course I had visions of driving around on a road trip in one. Only issue is that camper vans are pretty wide so when they dropped me off at the car park in Aviemore they suggested I jump out and enjoy the rest of my day (rather than waiting for them) as it would take ages for them to manoeuvre and park.

So- I’d made it to Aviemore, which had a distinctly alpine feel. I sat in the park eating my porridge pot and feeling warm, slightly hazy, thoughts towards my fellow humans.

For the next few months I’ll be writing about a wider ranger topics than usual because I’m taking some extended leave and expanding my horizons in a variety of ways. I hope you’ll come on this journey with me.