Trailblazers: Women Leading the way. Best panel event I’ve been to this year.

“If you want a friend in politics get a dog.” Lessons from a great panel event 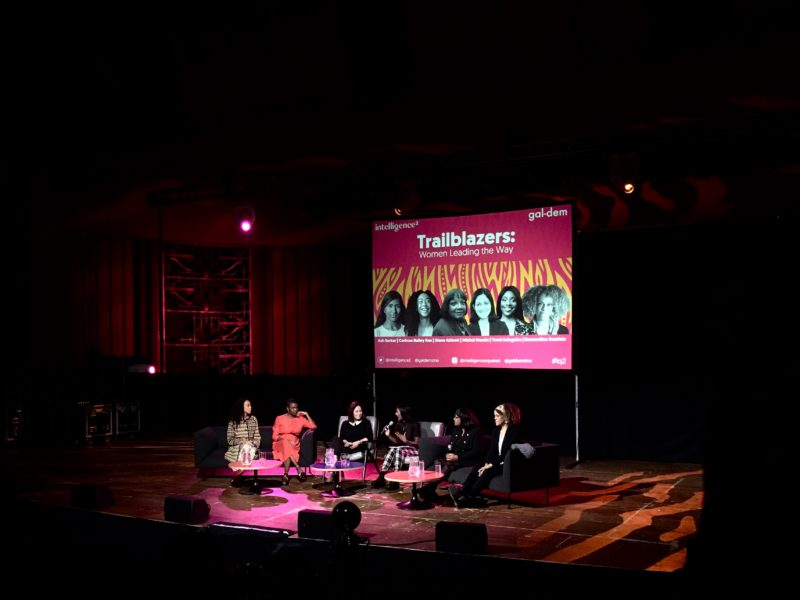 Last week I was working in Manchester on Wednesday and Leamington Spa on Thursday. I had several hours’ train travel ahead and realised that I’d booked a ticket for an event on Tuesday in London ages ago. On Sunday evening I looked at my forthcoming week and thought “I really can’t be bothered to go out tomorrow evening. I’ll stay at home instead…”

Later, I got a reminder email from the organisers in my inbox… 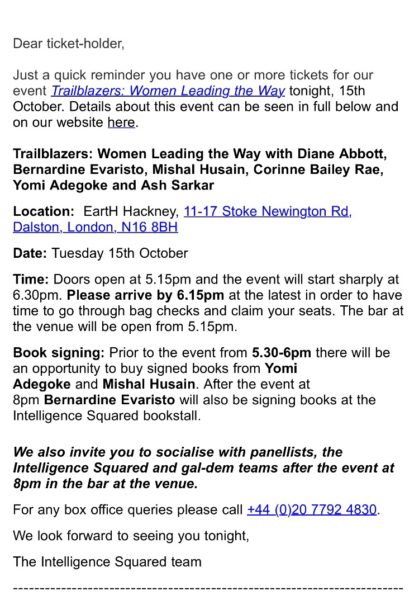 “Oh”. I thought. Now I remembered why I’d booked a ticket for Trailblazers:Women Leading The Way in the first place. At this stage Bernadine Evaristo had just been confirmed as the first ever Black woman to win the Booker Prize.

So I went. On reflection it was totally worth it, despite getting to Manchester at 2300 hrs that evening. I enthusiastically texted a number of people after the event to tell them how good it was and share key quotes that I thought were relevant to them.  Below are some of my personal highlights from each panellist.

Diane Abbott was Britain’s first Black female MP. The Trailblazers event was held at Earth Kitchen, a great space in her constituency of Hackney North and Stoke Newington.  Diane described her experience as a working class Black girl studying at the University of Cambridge,

“I sat in one of my early seminars where I was surrounded by middle class white girls and thought ‘Diane, what the fuck have you done?!’ That phrase feels like the theme of my life.” – Diane Abbott, MP

Whatever you may think of Diane’s politics, she is a pioneer and bought a wealth of experience to the panel. One poignant moment was when she spoke about failures. She said she ran for leader of the Labour party in 2010, even though she knew she wouldn’t win but still found the leadership contest a positive experience overall that moved her forward. However, when she ran for Mayor of London in 2015 she felt she had a real chance and was disappointed as people and groups who had pledged support in private were nowhere to be seen when it really counted in public.  As she said wryly, “If you want a friend in politics, get a dog.”

I was left with the feeling that Diane had experienced so much in her career that she chose not to disclose but that her memoirs, if she ever chooses to write them when she retires, will be juicyyy.

Yomi Adegoke is the co-author of Slay in Your Lane, which I have enjoyed read, reviewed on this blog. She bought a feeling of effervescence to the panel and it was a delight to watch and listen to her warmth and energy while she gave her insights. Yomi outlined how her current success, which includes being a Guardian columnist and best-selling author, came out of what seemed like failure. Whilst studying law at Warwick university, Yomi experienced mental health issues and dropped out, depressed. Whilst wondering what to do she started a blog and wrote about various issues related to society and her experience as a young black woman. During this time a few professional journalists read it and encouraged her to pursue journalism. This opened Yomi’s eyes to a new path in life “I like to complain and now I can get paid to do it!”

Mishal Husain could read out my shopping list and I’d listen intently. Her voice is so soothing. She is an experienced journalist who has interviewed celebrities and high profile politicians from the UK and internationally.  As a high profile BBC presenter (and possibly with the Naga Munchetty controversy still fresh) I noticed that she didn’t clap or respond in anyway when Ash Sarkar and Dianne Abbot said anything that could be considered party political.

Mishal oozed personable confidence, as somebody with her career accomplishments has every right to do. When asked a question about imposter syndrome or getting nervous on the job she explained “If I allow myself to get into a [spiral] of ‘that’s not good enough’ my performance will suffer.”

However, Mishal gave an interesting insight showing that all of us have doubts at times even those we look up to as being accomplished and successful. She gave an anecdote about when she was asked to present the Today Programme, Radio 4’s flagship news show. Her first reaction was “I’ll say ‘no’ because it will be too hard.” But later when discussing her decision with her husband he made her see that was the wrong decision. This reminded me of a podcast interview that I did with Amanda Speilman, Chief Inspector of Ofsted , who similarly had ruled herself out of applying but changed her mind when she heard a news report saying she was being considered!

Corinne Bailey Rae is a Grammy winning recording artist. Evening events like this can be very London centric so it was great to have Corinne’s silky Leeds accent on the panel (maybe she and Mishal should record a CBeebies bedtime story?) Corinne had interesting insights into how to succeed when you aren’t really what people are expecting. She had started out in a Riot Girl Band at Leeds University at a time when Black artists where meant to be “urban and from London.” Corinne highlighted the importance of being able to adapt to your situation. Yes, she was authentic, honest and vulnerable in her music but at contract negotiations and meetings with record label executives she made sure that she was prepared, knew what she was talking about and acted appropriately.

I also enjoyed Corrinne’s concept of confidence being a safety net that allows you try new things and push yourself safe in the knowledge that you can try, sometimes fail, bounce back and try again.

Confidence is a safety net that allows you to try, fail and bounce back Click To Tweet

I first became aware of Bernadine Evaristo when I read her novel, Mr Loverman a few years ago. It was funny and insightful and has stayed with me for years. Imagine Brokeback Mountain but with two old married, Caribbean men who have spent most of their adult lives in London. Barnadine appeared on the panel having won the Booker Prize for her new novel Girl, Women, Other the day before. Bernadine is not as well known as her co winner, Margaret Atwood but she explained she was happy with her career choices as “I write the books I want to write, how I want to write them.” It is important to note that Bernadine found a publisher who supported her writing choices for over 20 years and did not force her into a mainstream box which didn’t suit her.

When asked about confidence, Bernadine explained that she had given herself a good talking to as a much younger writer “Why, when you start, do you expect defeat?” This resonated massively with the audience as it can be too easy to write ourselves off before we’ve even began.

Ash was not a neutral chair. Her left learning credentials were very much on her sleeve in her comments and responses. Whatever your politics, she was excellently prepared and asked insightful and at times quite challenging questions of the panellists that lead to wonderful reflections, a great discussion and very enjoyable evening.

Diane Abbott gave a thought provoking response to an audience member’s question about authenticity and navigating the workplace. “Save your real self for friends.” This sort of response is unfashionable in today’s authentic era but in many ways I think Diane has a point. You do have to be professional at work and get things done but I think there should be space for people to bring enough of their personality, experience and worldview (as long as that isn’t detrimental to others) so that work isn’t dehumanising.

The most powerful, and for me inspiring, story of the night came from Bernadine Evaristo. She outlined that for many years while she was struggling as a writer she had written affirmations. For every book she wrote she would visualise winning The Booker prize.

This was at a time in her career when such a goal seemed ridiculous -Even this year, when she actually won, it was unexpected. Buyers had bulk bought Margaret Atwood’s The Testaments in advance expecting that to be the sole winner – Bernadine outlined that it wasn’t just the writing and imagining her goal that was important.  Crucially, to get closer to meeting her aim, she improved her writing and pushed herself with every book so that she became the kind of writer who could realistically win the Booker prize. Interestingly she hadn’t written the affirmation for her most recent two books but when she heard she was shortlisted for the Booker prize the years of believing that she could win came back.

Listen to the podcast https://play.acast.com/s/intelligencesquared/trailblazers-womenleadingtheway?autoplay