Take trans people’s names out of your mouth

I’m fed up with  people conflating trans women with rapists. 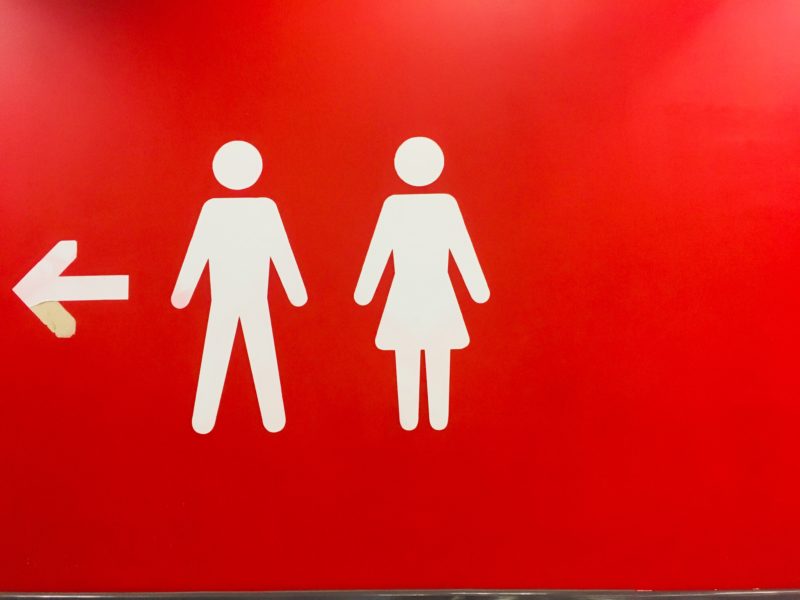 I was in a public toilet recently minding my own business and wondering if I’d still catch my train despite my wee detour.

Then I noticed a sign on the back of the toilet door which I have to say incensed me.

Toilet cubicles can be useful places to transmit messages. They are places that Chantel can tell the world how much she loves Jaheim.  Additionally, the local domestic violence hotline can put a message to women in danger as it’s the one place they’ll be alone and able to note a number down without judgment and prying eyes.

Imagine then, using an intimate space like that to try and turn other people against one of the most marginalised groups in society. 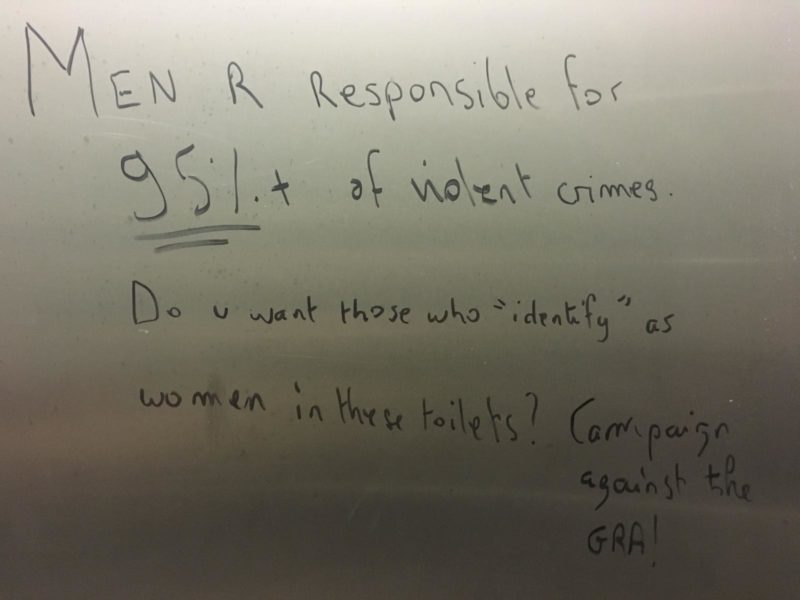 If I’m being honest, a few years ago I’d not really given trans people a great deal of thought. I am a queer, cisgender woman. I happily inhabit a woman’s body (apart from during period time). I’m identified by other people as a woman and I hadn’t really had to think much about issues of gender identity. I didn’t know anybody who was transgender (to my knowledge) and I didn’t really understand it. In the interests of transparency I’d say there is still plenty I don’t understand and I have lots of questions.  For the record, I’m somebody who feels that it’s fine for all men and women to be as feminine or masculine presenting as they wish on any given day without other people passing judgement.

Let’s rewind to maybe 10 or so years ago. I was at a gay club just off Old Street in London on a random week night with some friends (this was pre children so mid-week clubbing seemed like a feasible thing). Across the dance floor from us was what appeared to be a man in his 50s dressed in women’s clothing. They were on their own and we got talking and dancing.

They explained that they were on a business trip and always dressed as a woman when away on business. Their wife refused to talk about. We had fun on the evening but it was clear that this person was very sad and weighed down by the double life that they felt compelled to live.

They may just have enjoyed wearing women’s clothes or in today’s language they may have been non-binary femme or identified as a trans woman. I have no idea as we didn’t discuss gender identity that evening, I don’t think I’d have known what that phrase meant then. We mostly just danced.

Whatever the language, I saw a person who was in an immense amount of pain and unable to talk to their wife and family about what they saw as a core part of their identity. They’d come to a place where they thought they might feel safe and accepted and not be judged. I didn’t feel threatened by them and neither did anybody else in my group (who all happened to identify as women).

Since that time I have taught a small number of students who have come out as trans and have people in my wider life who also identify as trans from their experiences I know coming out as trans can be a difficult process that is potentially isolating and has many ramifications in key areas that affect us all such as employment, education, relationships (romantic, friendship and familial). Even doing mundane activities like your weekly shop or using public transport could put you at risk of harassment.

I hear a lot about women’s spaces and women’ rights. I want equality and safety for women. All women. This includes trans women.  My own opinion is that if you are fighting for women then fight for all women and stop demonising groups who don’t fit your vision of womanhood. I find the demonisation of trans women (my observation is that trans men seem to be more generally ignored rather than demonised) especially disappointing from people who are ourselves from groups traditionally marginalised by society. Many trans people have also had to wrestle with their sexuality and as a queer woman I think it’s sad that members of LGB community that they once felt would accept them have instead decided to ostracise and demonise them.

Most trans people just want to live, work, love, laugh and exist in peace. I believe that lesbian, gay, bisexual and queer cisgender people should be supporting them.

Two decades ago, while I was at university, people were equating gay men (and by association lesbians) with paedophilia. This moral panic fed into discussions around why the  homosexual age of consent shouldn’t be lowered to 16 and why many gay people felt unable to be out if they worked with children (not to mention section 28).

In current times, I note the increasing use of the behaviour of men who are abusive, violent and possibly rapist being deliberately associated with transwomen.  There is so much to unpack here but I’ll keep it  on a basic human level for now. Other people can talk about things like the Gender Recognition Act[2]. I’m not an expert and nor will most other people be but I can understand my own concept of basic humanity and how I feel people should be treated.

Below is a simplified version of the hypothetical scenario I often hear from people who wish to exclude transwomen from female spaces. It’s not dissimilar to the one on the back of the toilet door that prompted this post.

“A man can call themselves a woman and then dress like a woman and walk into a place designated for women and then attack them” – A.N. Random

Some people are dicks

Some people are dicks.

Some men are dicks.

Some women are dicks.

Abusive, violent men already exist and seem to be finding plenty of ways to be violent and abusive without the charade of pretending to be women.

Men who commit sexual assault are statistically more likely to be known to their victims. Most rapists don’t randomly walk in to a women only space or changing room. According to Rape Crisis, 90% of people raped know the perpetrator prior to the offence.

Sadly, I can think of a few women who I know in my personal and professional life who have been violently and or sexually assaulted by a man and none of them was attacked by a stranger.

For those disturbed individuals who really do want to go into toilets or changing rooms and attack random women, they can already do it. They just need to go in when it’s empty and nobody is looking. Or dress up as one of the cleaning staff, which is probably a lot easier than self-declaring as a woman and finding suitable clothes.

Trans women are not men. Stop blaming them for dickhead behaviour mainly perpetuated by cis-gender men.

Some people are violent and abusive. Others are lovely. This goes for all people. I’ve got a handy (not that great) Venn diagram below and obviously the geek in me is always struggling to get out so we’ll go with a bit of statistical notation for those of you on the ball today. 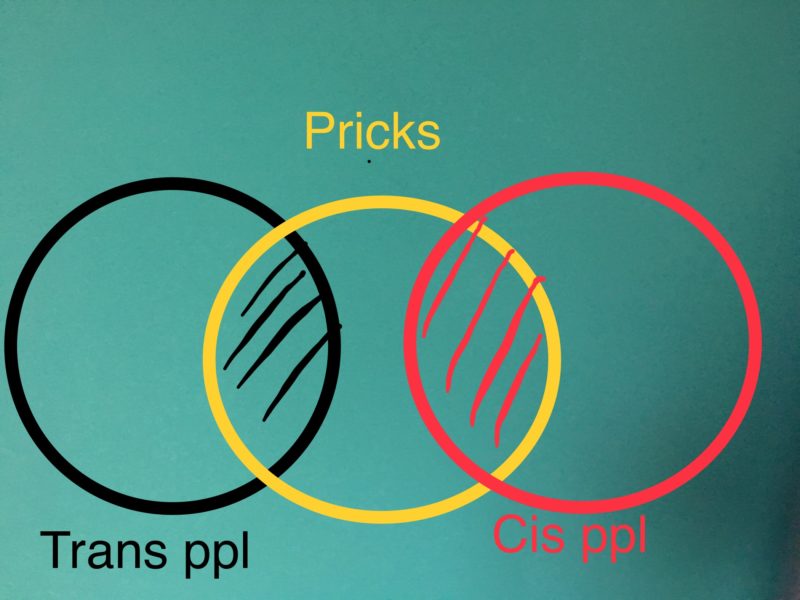 I’m not sure who is in the unhatched section in the “prick circle” ? Pricks who prefer not to say? Pricks who are intersex? Dunno- I’m still learning myself and happy to be informed.

Recently I was helping out at a fashion show featuring only trans models . Just before the event started I had to get changed so I could be presentable as an usher. For the first (and only so far) time in my life I was in space where I was in the minority as a cis person. I was in a room where some people had been assigned male at birth and now identified as women and where other people had been assigned female at birth and now identified as men. There were also a few people who didn’t fit into either of those categories and identified as non binary. Getting changed was a non-issue. Space was limited so most people got changed together in one room. I’m not an exhibitionist by any stretch and I felt totally fine. A fair few of the trans women were shyer than me. Nobody made me feel uncomfortable or unsafe. There were also individual toilet cubicles around for anybody who wished to use them.

Yes, a minority of people are violent, abusive, aggressive dickheads who invade other people’s space or take up space where they shouldn’t but those people can already be evicted from spaces with existing laws. Let’s not use the existence of dickheads as an excuse to perpetuate bigotry in the name of protecting women. It would be better and more honest to say you don’t like trans people and go about your, bigoted, merry way. Or as my nan might say “Take trans people’s names out of your mouth”

It’s a hostile climate for transgender people at the moment. Cisgender people can help by challenging transphobia in our day to day lives on and off line. You can also share this article via email or social media and check out some of the work by the trans men and women below.

Special thanks to the following who kindly helped me iron out early drafts of this post so that language was inclusive to trans and non-binary people.

Dr Meg John Barker, author and speaker. If you want to find out more about gender they have a handy zine.

Juno Roche. Author. Writer of Trans Power: Own your Gender

[2] Trans people in the UK. Government and Equalities Office.