Taking a break from the old routine

It’s August and the summer holidays. Time to slow down the pace a bit. What might you notice about your surroundings if you step off the hamster wheel?

Last week I called to do jury service. There can be lot of waiting around. One day we were dismissed earlier than usual and I stepped out of the court house into the summer sunshine. Like the semi- addict that I am I checked my Twitter feed and noticed something from somebody who had recently completed part of a spiritual retreat and I got thinking. 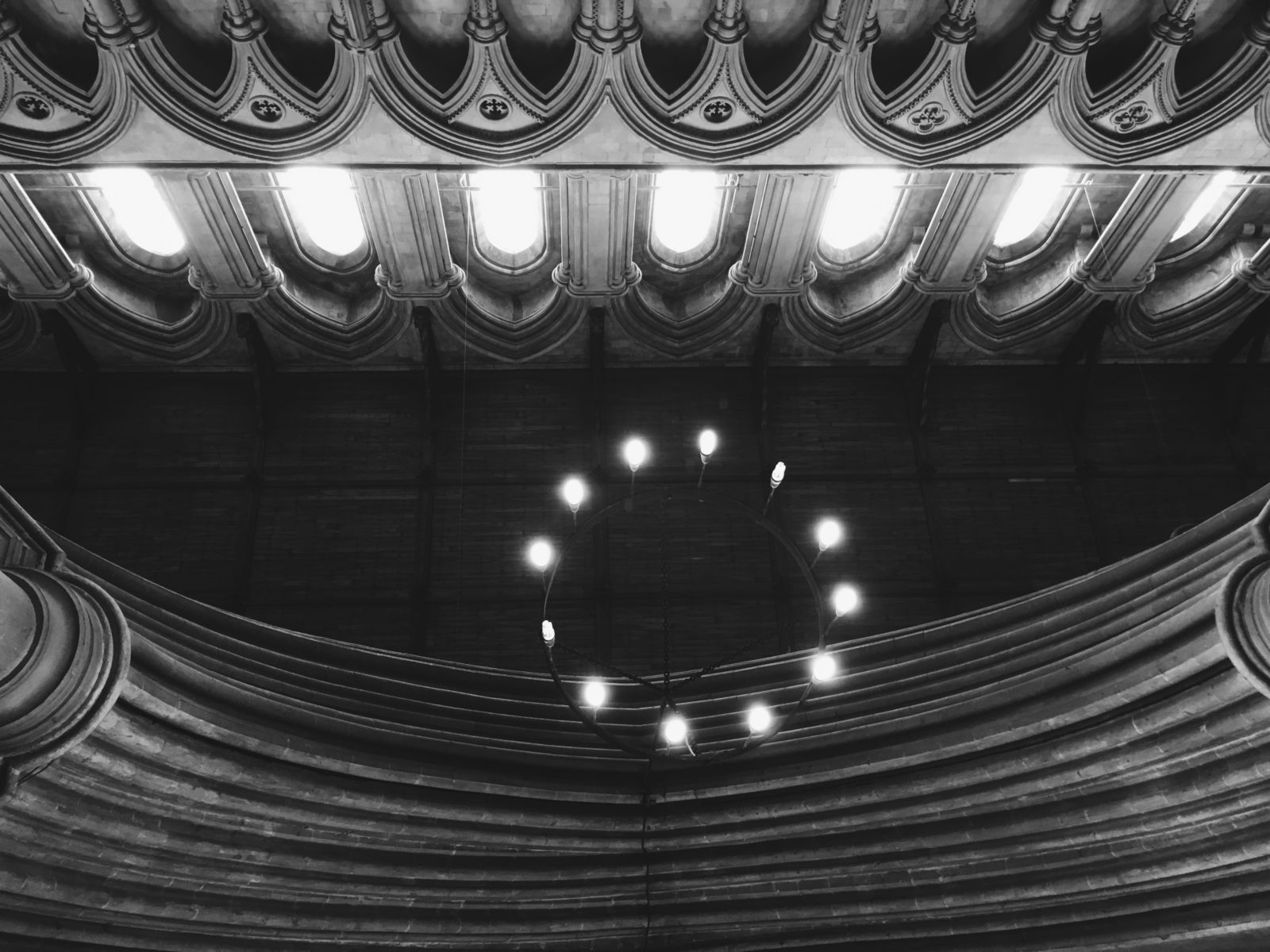 I was also savouring the first few days of what would have been my summer holiday from school if jury service had not interrupted it so I decided to take a detour. So much of modern life is spent rushing from place to place, having one deadline after another and wringing the productivity out of every waking minute. Sometimes in can be nice to do a Ferris Bueller and take a look around before life passes us by.

It felt decadent having no particular destination or goal in mind and I decided to take a different, longer route to my car and see what I came across. After about 5 minutes of aimless but happily solar powered meandering I noticed St Albans Cathedral.  I live about 15 mins drive from the town of St Albans and have been there countless times. I used to drive through it every day to work but I’ve never been to the cathedral. You know how you can be familiar with a place but not really know it? Or only go to the places that you need to as part of your daily routine? It’s similar to how, despite living my first 25 years in London, I’ve never visited the Tower of London or other major landmarks that tourists flock to.

Possibly because I’d been talking and reading about pilgrimage only a few minutes before, I was more amenable that usual to going in, I’d passed this place several times and not given it a second or even first thought.

My partner describes me as a Christian Agnostic. That is to say I’m agnostic but with the lingering leanings and sensibilities of somebody who attended church weekly throughout childhood and early teenage years. I have spent many hours in Pentecostal church services (long but good singing and food- occasional speaking in tongues and hell fire) as well as Methodist (quick, boring, no food) and Baptist ones (quick also good food because 90s Brixton). I even had a brief but intense stint attending an evangelical, fundamentalist church while a student (great community, shame about the bigotry and possible cult tendencies).  I was eventually turned off by what I saw as dogma and bigotry but you never fully shake off your upbringing.

Anyway, the sun was shining. I was in a curious and contemplative mood and that combined with a Twitter conversation and my dormant Christianity meant I decided to step inside.

I’m always interested in mental resilience and have previously written about 5 steps to wellbeing. The EEF has “notice” as one of their 5 steps. So in the interests of wellbeing here is what I noticed.

It was 30 + degrees outside and rather than appreciating the weather everybody was moaning as is the English weather pastime. The cathedral was a welcome respite from the heat, much as I love it, because of the stone construction.

Fascinating parts of history can be on your doorstep

Upon entering, a helpful sign informed me that St Albans was the oldest site of continuous of worship in England.  I’m not a historian but for a general all-purpose geek like me this was pretty interesting. It had started life as an Abbey and managed to escape the madness that occurred during the reformation and disillusion of the monasteries. Who knew this major part of English history was only  8 miles from where I live? 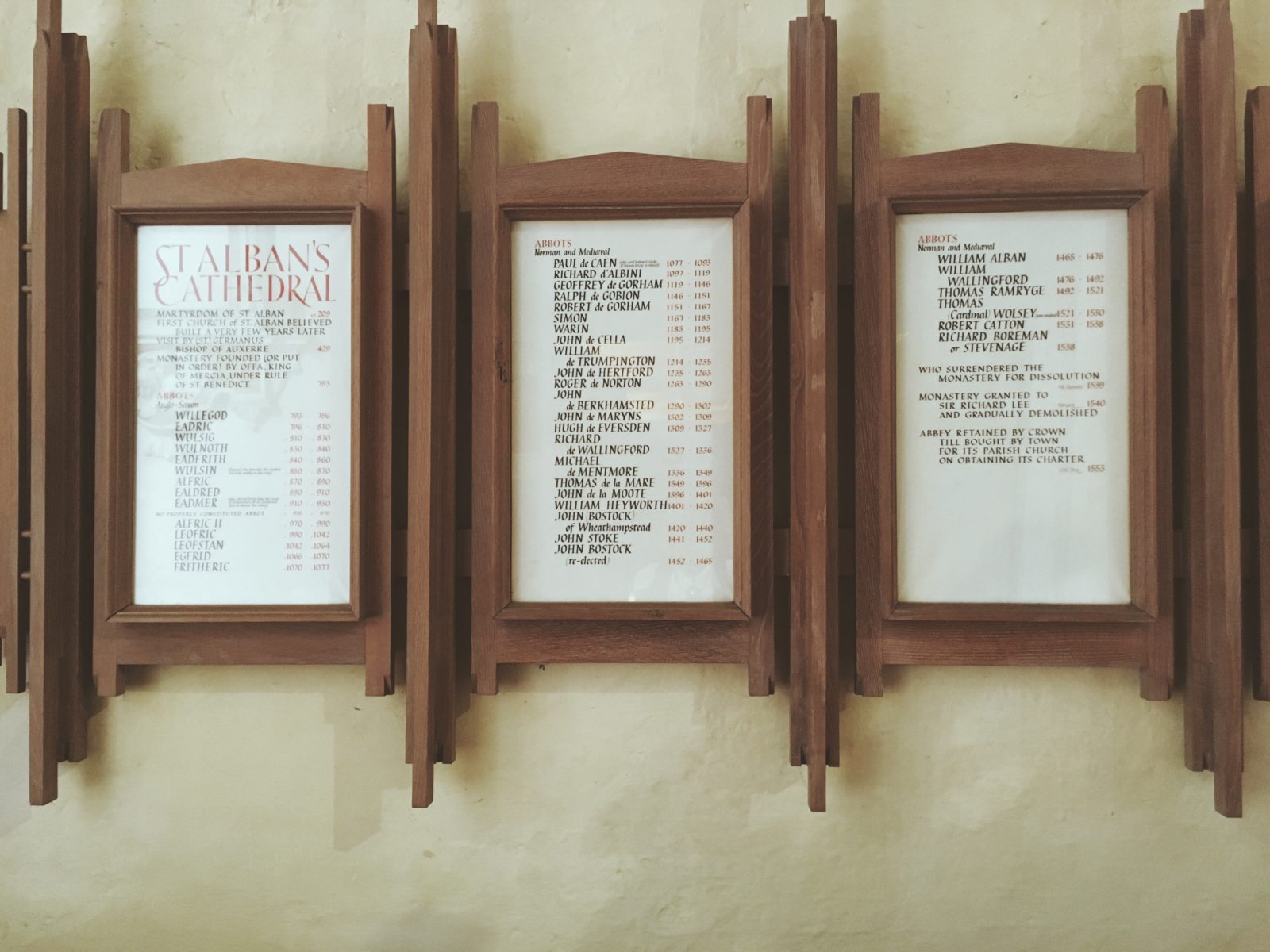 In part of the cathedral names of former abbots and important men are listed from whenever they started taking records. This is something that I usually don’t bother looking at, who cares about a load of dead guys that I’ve not heard of? But as I looked I noticed history in the names. Between 793 AD and 1077 AD the surnames were all very Beowulf and Lord of the Rings,

From 1077 AD onwards I started to notice a bit of French creeping in, presumably because power had shifted to Norman invaders at court due to the Battle of Hastings.

Then names that start to be more recognisably English, related to local place names.

As somebody who has been thinking about identity and heritage a lot recently, prompted by the ill health of my grandad, I found the names and what they seemed to signify about heritage and shifts in power interesting.

The power of architecture 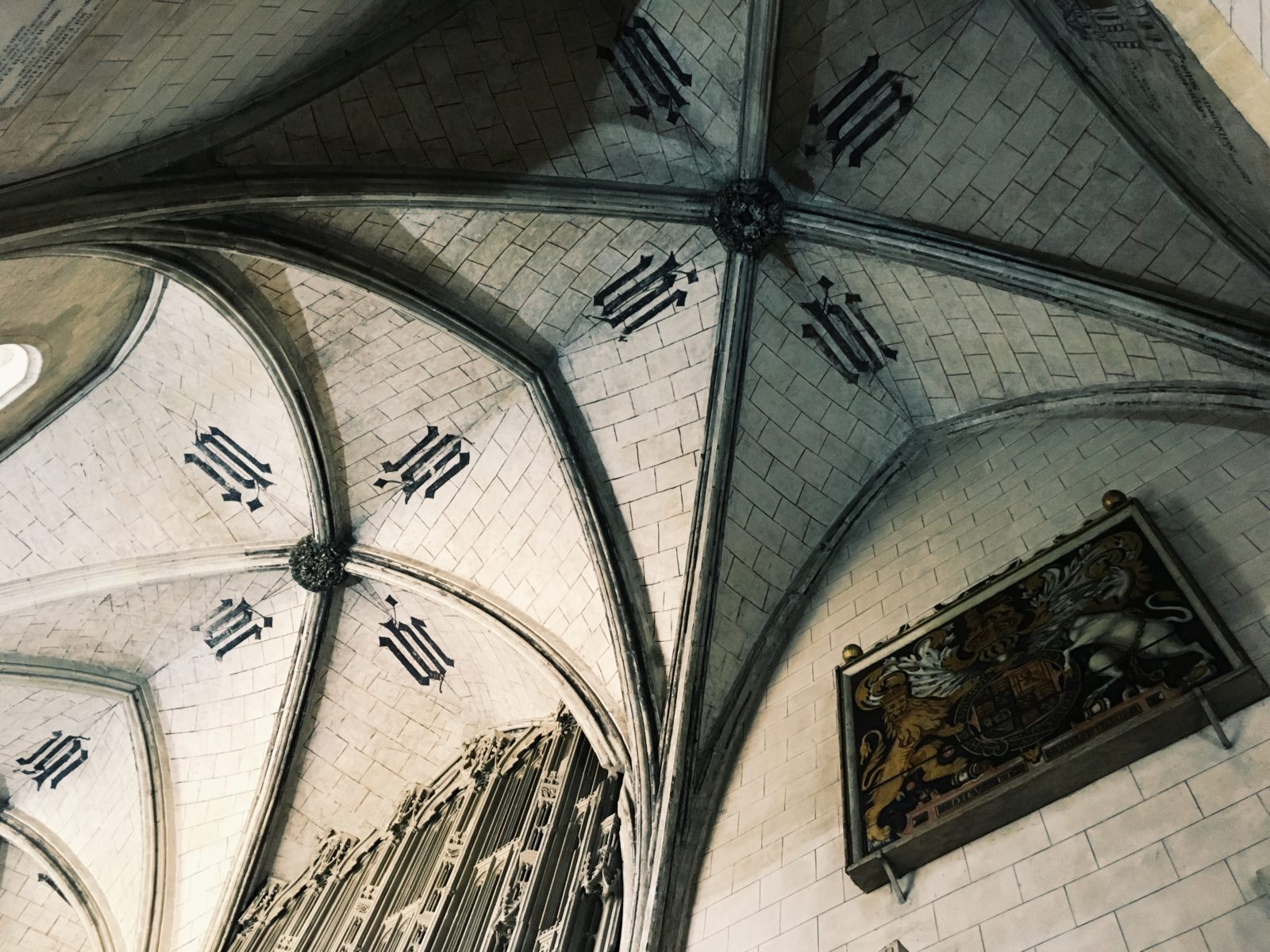 Last Christmas (2017) I was given a book called Brutal London as my ‘secret santa’ gift. I flicked through the photographs of London building in the Brutalist tradition with glee- one of my colleagues is clearly aware of my interest in architecture and photography. I’m always interested in design and how great architects integrate the purpose of a building into its design. This interest could also be because I’ve worked in too many school buildings that were not at all fit for purpose, with little thought to how teenagers move around, interact and learn in certain spaces.

Traditional church architecture has always been interesting to me. I love the high ceilings and art work in cathedrals. You are forced to look up, presumably to remind you of the direction of the heavens and the majesty of God.

As I walked around, my pace slowed. I sat on a cool step and watched my fellow visitors walk by. From my teen years I have always been plugged in, first to my Walkman (in the back of Mr McAdam’s lesson, earphones up my sleeve), then my too bulky Discman, through to iPod of free MP3s and now my smartphone.  In keeping with the calm of the place and in an effort to be fully present I decided to turn my podcast off. Then I heard strains of music, music I love. It was a song I first heard via William Orbit probably on some Ibiza chill out type set on the radio or in a club.  When I met my partner she had a different but still familiar version on one of her classical CDs. It was the always soothing Barber’s Adagio, but played by the practicing organist rather than with strings. I couldn’t resist recording a snippet to send her.

Eventually I left feeling calm and refreshed. I doubt I’ll be rushing back to Christianity any time soon but I know that many of you reading work in or with schools and I want to share with you the value of taking time out from your normal routine. Half an hour left me feeling light, rested and refreshed.

Whether you are on holiday or still at work, I wish you a summer season where you make some time to rest, reflect and take a break.